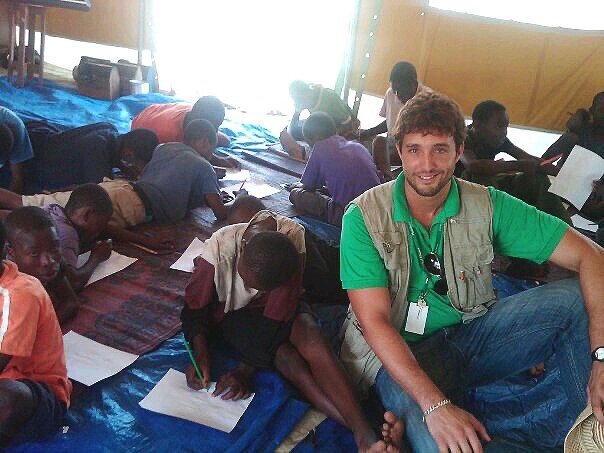 Getting your foot in the door

Why I quit investment banking after four days

Part one of an inspiring Q&A with Ramsey Ben-Achour, Representative of the United Nations Special Envoy for Haiti

What is your current role?

What is a typical day for you?

There’s no such thing as a really typical day, because my time is split between Haiti and UN Headquarters in New York. But broadly my days include meeting with the victims of cholera, the coordination side with the UN agencies who are actually doing the response, the fundraising side, and the political side.

To take an example from last week in Haiti, I met with a group of victims of cholera and then the heads of cholera victims’ associations to explain the United Nations’ approach to supporting victims of cholera. We’re taking a community-based approach where we identify victims and empower them to identify their own priorities and then help them come up with projects that respond to those priorities. They’re very happy with what we’re doing; they feel empowered.

But the victims’ groups want individual compensation, so they were not happy with that approach and for the four hours I sat with them, they were strongly voicing their concerns. I then convey that back to the Secretary-General and the Deputy Secretary-General, to make sure everybody’s aware of what’s happening on the ground.

After meeting with victims and victims’ groups, I’ll meet with UNICEF’s emergency water and sanitation teams to see what they need, including funding. Then I’ll talk to the World Bank and the [Bill and Melinda] Gates Foundation to advocate for more funding. I just finished writing a letter that will be sent from the Secretary-General to every Head of State in the world, advocating for funding for the final push to end cholera.

Give a quick summary of your career to-date. How did you get to where you are now?

When I was younger, I decided I wanted to be a journalist; I wanted to go to places that were forgotten and tell people’s stories. So after college, I moved to Palestine, out of the blue. I started doing journalism and publishing and I loved it, but I felt unfulfilled in what I was really trying to achieve, which was making an impact, making a change. I was telling people’s stories, but I was a passive observer to people’s lives and I had nothing to contribute to them. I was only taking and I decided I wanted to get more involved on the human interaction, human response, side of things. So I went and did a Master’s degree in development management and humanitarian response at the London School of Economics and then started volunteering wherever I could. I volunteered at a think tank in Berlin and at a non-governmental organisation (NGO) in Washington D.C.

My then-girlfriend got a job in Sri Lanka, so I showed up in Sri Lanka and got a job with Transparency International. There was a civil war and there were mass atrocities – 30,000 people were killed in one day alone. The government didn’t want international observers witnessing the situation and they weren’t giving work visas to anyone so it was very hard to get a job. I got frustrated and wrote on Facebook, “Does anybody know of a job in this country that doesn’t require a visa?” About four different people saw that and each mentioned a guy named Sean.

So I met Sean he said, “We should totally work together one day, but we’re having the same problem with visas in Sri Lanka, sorry.” I figured I would never hear from him again. Fast forward to January of 2010 – about six months later – and he says, “Ramsey did you hear about the earthquake in Haiti yesterday? Would you be interested in going and doing an assessment mission?” I said, “Absolutely, when do you need me?” And he said, “I needed you yesterday.” So I dropped everything I was doing, got on the next flight and flew to the Dominican Republic, because the airport in Port au Prince had been taken over by the US Military.

A magnitude 7.0 earthquake struck Haiti on the afternoon of 12 January, 2010.
An estimated 250,000 people died and 300,000 were injured. The epicentre was
near the capital, Port-au-Prince, where many buildings collapsed.

Before I knew it, I was driving into Haiti, post-earthquake – 300,000 people were killed in 20 seconds – and from that initial mission I ended up coordinating a medical response to the earthquake. I sent in doctors, set up the infrastructure for them to do clinics, and built an organization from scratch. I went from being a consultant doing an assessment to being a Country Director of a little NGO, which turned into a big NGO, which turned into UNICEF’s largest implementing partner, with 172 staff – 168 of whom were Haitians.

A team from the NGO preparing to travel to one of the borders of Haiti to try to intercept children being trafficked.

We implemented family tracing and reunification programmes for children who got separated from their families during the earthquake – people thought they were orphans but many of them weren’t – and we set up an anti-child trafficking project on the border. So we were intercepting children who were crossing the border and making sure they were with family members. Often times they weren’t, so we would take those children, place them somewhere safe, and try to trace their families.

I did that for 2.5 years, then became the regional director for the Middle East North Africa region for the same organisation, working in Syria, Iraq, Lebanon, Egypt and Jordan. From there I had to take a break because I was burnt out as hell, after post-earthquake Haiti followed by civil war Middle East, so I took a little bit of time off.

Why did you choose this type of work?

I was lucky early on to be exposed to different cultures and countries. My Mum is from New Zealand, my Dad’s from Tunisia, so by default I had to travel when I was a kid and I got exposed to very different ways that people live their lives and, in some cases, a lot of human suffering. It kind of touched me on the inside and I never thought it was fair that we could be living in such beautiful bubbles when so many people in the world are going through really hard times. And I thought, “I have to have a purpose here. I can’t work a regular job, I can’t just slave away for somebody else’s profits. There’s so much that needs to be done in the world and what can I do to make an impact?”

I tried investment banking. I made it four days before I quit. And when I had my first experience [in humanitarian work] and I saw a real impact on a real human, I was hooked and I decided that my life would be dedicated to that and I didn’t mind moving around – I love it, actually. I’ve gotten to see so many different countries. I’ve travelled to over 50 countries, I’ve worked in over a dozen countries, and I’ve so many stories of people’s resilience that have gone from awful situations to slightly – and, sometimes, very much – improved lives and it’s just addictive to see that transformation and know that you played a small part in that.