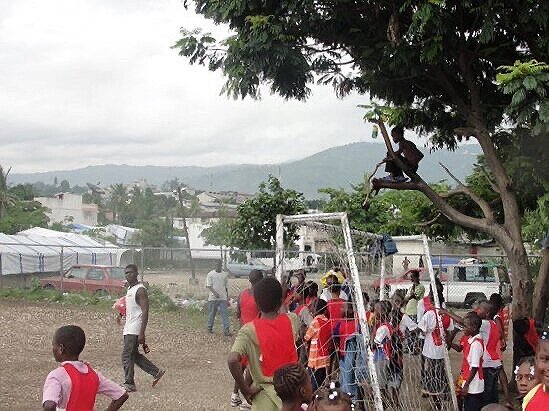 Do disasters and relationships mix? Paying a personal price for your work

Part two of our Q&A with Ramsey Ben-Achour, Representative of the United Nations Special Envoy for Haiti.

What is the hardest thing about your career?

I spent the entirety of my 20s moving around the world, going to different wars, natural disasters, etc. And I wouldn’t change it for anything. But it’s very hard to have a ‘traditional’ personal life. I didn’t go out clubbing and partying and doing all those things that you’re probably supposed to do in your 20s. I mean, I’ve gone to clubs in Bamako [Mali] – not exactly the same thing. But I think, to an extent, I traded a comfortable, stable life where it’s easy to form relationships, for an exciting, mobile and meaningful life, but the personal side has been a bit tough. In an ideal world, I would have already had children by now, I would have had my own family by now. And that has been hard. There’s a lot of people in this industry who are either single or divorced. This is not necessarily something that I want forever, so to a certain extent, I’m trying to figure out how I can convert this world into something a little bit more stable. And there’s ways to do it. It’s just about figuring it out.

What is the one thing you’ve done, or the one moment you’ve been a part of, that you’re most proud of?

That’s a really hard question. There’s a couple of work experiences that have been what I can only describe as magic. After the earthquake in Haiti, the situation was complete chaos. Like I mentioned, 300,000 people were killed in 20 seconds. There were still bodies in the streets, the cities had collapsed, the first responders were also the victims, the UN headquarters had collapsed and over 100 staff members had died, NGO workers had died, government members had died. It was just pure and total chaos. And in amongst it, so many children got lost and I set up a program that went out looking for these kids. Most of the time, we were finding them in hospitals. So a child, for example, would be unburied from the rubble, taken to the hospital, transferred to another one, transferred to another one, transferred to another one, and ultimately healed and, when they’re ready to be discharged, they’re like, “Well hang on, wait, who is this person? Oh, they must be an orphan, send them to an orphanage.” These orphanages in Haiti are literally hell on earth – they’re the worst places I’ve ever been.

In fact, those kids had families that were looking for them and had thought that their children were dead. And so, through this programme, we were able to identify, find, place somewhere safe and then, ultimately, reunify hundreds of children. In one reunification, a 12-year-old boy was playing football, the earthquake happens, everything around him collapses, dust goes into the air, he’s terrified, he runs home, his home has collapsed, his neighbour’s outside screaming, “Everyone’s dead”. And all of a sudden, this 12-year-old boy became an orphan. He’s living on the streets now, begging, starving. Older kids steal his shoes, he’s not doing well, he hears there’s opportunities out in the provinces, so he saves up his money from his begging, goes out to the provinces, but there’s no opportunities out there. He’s out on the streets begging, he gets hit by a car. They take him to a hospital and we’d already been there, putting up flyers saying if you find an unaccompanied child, call us.

Thinking his family had died in the earthquake, this boy had then been hit by a car
while begging on the streets. Staff at Ramsey’s NGO found out his Mum had survived,
and they were reunited.

So the hospital calls us, we send out our team, we sit with the kid and we asked him some pretty basic questions, including, “Before the earthquake, did anybody in your family have a cell phone?” And he said, “Yeah, my Mum did.”  We asked if he remembered the number and he thought about it and gave us the number. I picked up a phone, called the number, and his Mum picked up. The neighbours were right – everybody died – his siblings, his Dad, his uncle, his aunt, they all died…but not his Mum. Mum was at the market, everything collapsed, she went running home to find that her whole family was dead. And that little boy was so convinced that his family was dead he never even tried to call that number. And with one phone call, we were able to reunite two people who thought they were alone in the world. And to me, that’s magic. And it never would have happened, had we not been there.

What have you learnt about yourself doing this type of work?

When you’re part of a humanitarian response, you tend to think about everyone around you and you don’t really focus in on yourself, when we should. So it wasn’t until later in my life that I started to try and adjust and unpack everything that’s happened and take lessons from that. I’ve learned that I’m motivated through helping others, but that’s often at the expense of myself. And I’ve learned that it’s important to take care of myself as well, sometimes. In order to help others, you have to help yourself first. I’ve learned that I’m not as invincible as I thought I was. I always jump into things head-first and I’ve had some very close calls. I’m much more cautious now.

I think Mr Rogers told this story about his mother and he said, “When I was a kid, we would watch the news and I would see these terrible things happening and I would cry. And Mum always told me, when bad things happen, look around for the helpers. There’s always helpers.” And that is the human experience. There is bad, but there is always good. And if we can choose to focus in on the good, then we can get through it.

Ramsey with one of the teams who were trying to track down the families of children who had been separated
from them during the disaster.

I think we always tend to look to one person who’s done amazing things – international, big names. My heroes are the people on the ground doing the actual work. Even myself, I’m on the ground, but I’m not doing the actual work. The people from these countries, these are the real heroes. Right now, working on cholera, we have teams of Haitians who are literally on-the-go all of the time, leaving their families behind, going to small communities, going by donkey, walking for hours and saving lives. Those are the true heroes. So, I would never simplify it down to one person, I would never say any of these big names, because the true impact is at the ground level; I get my inspiration from those people.

What’s your best advice for someone wanting to follow your career path?

Have an adventurous spirit, don’t be afraid to take opportunities. Things happen, opportunities come up, jump on them, run with it. They always say you have to make your own luck. And part of making your own luck is being willing to go when you see an opportunity. And it can be very scary to just drop everything and be thrown into Haiti, be thrown into Iraq, be thrown into any of these places. But every time you do it, it gets easier for the next time. You get more comfortable in the discomfort, until the discomfort becomes comfortable. Embrace that and run with it.